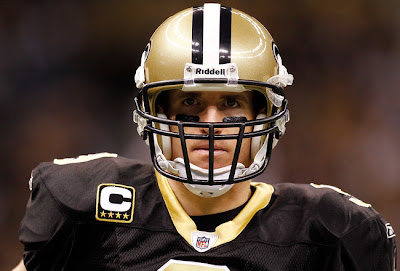 Well, there's no denying that the Saints have made this an off season to remember. Drew Brees' contract - or lack thereof. The NFL "releasing" the information about the bounty scandal right at the start of Free Agency. The suspensions of Sean Payton, Mickey Loomis and Joe Vitt. Signing Marques Colston to a bargain contract. Carl Nicks? Who's that? Hello, Ben Grubbs. Broderick Bunkley's neck is here to give Roman Harper's a run for its money. Lofton, Hawthorne, Chamberlain...we got this. Then the Bill Parcells drama. Big Tuna in the Big Easy!!! Squeeeeee!!!!! The appeals and the suspensions being upheld. "We didn't need the distraction of Parcells anyway." And so it continues...

And here we are, a couple weeks out from the draft and I couldn't be more ambivalent about the upcoming season. Half of me buys into the "it's us against the world" mentality that led the Patriots to their undefeated, yet ultimately disappointing, season that followed the Spygate fiasco. The other half of me wants to go outside, look up, and make sure the sky is still there. So that's how I feel and I'm certain it's not just me. In the face of all the destruction facing this franchise throughout this off season, moves have been made that have been the  fantasies of many a Saints fan's wet dreams since the Dome Patrol Era. What we need now is a sense of normalcy.

Drew Brees. This guy has been priority #1 since the loss to the 49ers but still remains unsigned. I have faith that this deal will get done before the situation reaches a critical mass. There is no reason to believe that Loomis, a man who has stated that he will be out of a job if he fails to sign Brees, cannot make this happen. Look at his record. Loomis hasn't let a single player get away that we wanted to keep, much less someone of Drew Brees' caliber. That's good enough for me. If that's not good enough for you, cool. Keep on keeping on with the "Drew Brees is greedy and needs to shut up and eat a Jimmy John's!" and "Loomis is a moron. He should pay Brees whatever he wants!" nonsense if it makes you sleep better at night.

Head coach. I don't care. I really don't. Sure, it would have been nice to have Bill Parcells come in here for a year to win a Superbowl with his padawan's team, but such is life. Not happening. We'll be fine. Take a look at what we've got. Carmichael and Spagnuolo will do their job. Our team was showing up to organized workouts during the lockout last year. So let Joe Vitt be an extension of Payton through the preseason followed by 6 weeks on the beach before he takes the reins back from whoever handles press conferences and throws red flags in his absence.

Get those two things settled and we can tell ESPN to shove that SAINTS banner on their ticker where it belongs. Jeff Duncan will be out of garbage to spew and won't be able to retweet Peter King or Mike Florio tweeting a link to some drivel he wrote bashing the Saints because he will return to his usual state of mediocrity and irrelevance.
Posted by insidejob at 12:52 PM