Since early March we've all known that player suspensions were coming for those involved in the Saints pay-for-performance program. Reported initially that 22-27 players were involved in the program and that suspensions would be sweeping and severe had us all bracing for the cataclysmic demise of the Saints defense in 2012. Could it have been worse? Of course. Does that make all of this any less likely to be overblown, trumped up bullshit? Absolutely not. 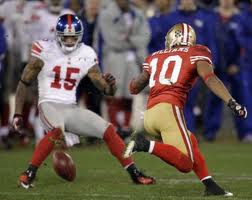 After the NFC Championship Game, the Giants admitted to targeting Kyle Williams because he had sustained multiple concussions. Giants linebacker Jacquian Williams didn't beat around the bush when talking about it. He was quoted saying:


"The thing is, we knew he had four concussions so that was our biggest thing...to take him out of the game."


Considering that this was before the NFL released any statement to the public concerning the Saints and their pay-for-performance program, I'm sure that when league spokesman Greg Aiello was question about the Giants statements and intentions, he didn't think twice before making this statement:

"Players are held accountable for their actions on the field. There were no illegal hits to the head or neck area to Kyle Williams on Sunday. There was no conduct by the Giants that would suggest an effort to injure Kyle Williams in any way."


So that's that, right? There was no evidence of an intent to injure on the field of play during the actual game. No harm, no foul. Whatever happened or was said in the locker room before or after the game means absolutely nothing and is no reason to look any deeper into the matter.

Unless it's the Saints we're talking about.

I am absolutely not one of the tin-foil hat wearing members of the Saints fan base who believes that there is some underhanded scheme to keep the Saints out of the Superbowl in New Orleans this year, but there is no denying the hypocrisy in the league's handing of this matter. Anyone who has paid even the least bit of attention to the coverage of this mess has heard from former and current players that locker room pools are commonplace. No investigations, suspensions, fines, and/or character assassination of other players, teams and organizations? Well, ok then. Fine, upstanding league you're running there, Roger. 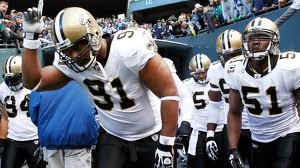 Let's be real here for a minute. This season-long suspension is crap. Rape, murder, racketeering, sexual harassment, face stomping, cheap shotting, (the list goes on and on) all warrant less of a suspension than talking shit in the locker room? And that's what we are talking about here: words. Things said in the locker room to motivate teammates and induce a heightened sense of purpose before taking the field in monumentally huge games.

Players get fined and suspended week in and week out during the season for personal fouls and on-field indiscretions. Taking that into consideration, any "bounty" related hits that were outside of the scope of the game should have already been assessed a fine and/or suspension, correct? Seeing as this never happened to Jonathan Vilma, he is being punished for shit talking in the locker room and being a team captain. Here's Vilma:

"I am shocked and extremely disappointed by the NFL's decision to suspend me for the 2012 season. Commissioner Goodell has refused to share any of the supposed evidence he claims supports this unprecedented punishment. The reason is clear: I never paid, or intended to pay, $10,000, or any amount of money to any playing for knocking out Kurt Warner, Brett Favre, or any other player out of the 2009 divisional playoff game, the 2010 NFC Championship Game, or any other game.


"I never set out to intentionally hurt any player and never enticed any teammate to intentionally hurt another player. I also never put any money into a bounty pool or helped to create a bounty pool intended to pay out money for injuring other players. I have always conducted myself in a professional and proud manner. I intend to fight this injustice, to defend my reputation, to stand up for my team and my profession, and to send a clear message to the commissioner that the process has failed, to the detriment of me, my teammates, the New Orleans Saints and the game."


Will Smith also says the commissioner is a lying sack of shit.


Right when this whole story broke in early March, Adam Schefter reported that the likeliest of Saints players to be suspended for their role in the pay-for-performance program were Jonathan Vilma and Will Smith because of their roles as defensive captains. Looks like he was right.

So here come the appeals. Appeals which will go absolutely nowhere and mean absolutely nothing. How the NFLPA allowed it to be collectively bargained that all appeals for off-field punishments are heard solely by the commissioner is beyond my understanding. The only resolution that could possibly come from this travesty is going to be through the courts and there is speculation that there isn't much of a remedy for the suspended players using that avenue either. The NFLPA seems to think they're going to have their day in court according to Schefter who quoted them saying,


"Get ready for a massive multiple legal battle over this on several fronts." 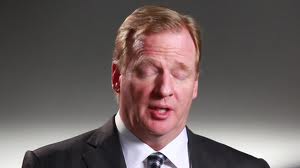 I hope so. This is the livelihood of these guys and they definitely should not go gently into that good night. I'm not holding my breath for the four suspended players to be vindicated in this matter, but I do hope it drags out like the Starcaps case did. The Saints have a window for winning and it is still open. Smith and Vilma's suspensions do not close that window. Hell, the Saints went 5-0 with Vilma on the sidelines last year. Spagnuolo is installing a new defense, so Vilma's understanding of Gregg Williams' ridiculous schemes no longer plays a role in his being the "quarteback of the defense." Still, I hope they stick it to that ginger bitch and wipe that shit eating grin off his holier than thou face before he has to hand over the Lombardi Trophy to the formerly suspended members of this team and organization in the Dome come February.

Oh yeah, Anthony Hargrove, you statement-signing-cheese-eating-ass-covering-motherfucker, go call your sponsor. Have him explain to you what "except when to do so would injure them or others" means.

Posted by insidejob at 9:11 AM

Email ThisBlogThis!Share to TwitterShare to FacebookShare to Pinterest
Labels: bounty, bullshit, Ginger Bitch, indignation, Jonathan Vilma, NFLPA, Suspensions, WE GOT THIS, Will Smith