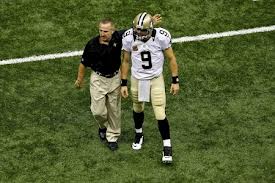 Finger #1 (it's the middle): Roger Goodell

Are you happy now? Have you accomplished what you were hoping to accomplish? Is the game safer? Do us all a favor and die. Thanks.

I don't care who you are or what your team looks like. With an 18 point lead and an offensive line that is having some real problems pass blocking, you run the god damn ball. Milk the clock and play field position. You've got three running backs you don't use. Sean Payton must be ashamed of the job you are doing. I know I am. Zach Strief may want to take the blame for yesterday's loss, but fuck that shit, if you see a man getting beaten all day, you give him some help. All day if need be. Back-to-back timeouts? You guys are so disappointing it's laughable.

I don't even think you're going to be able to get a job officiating a high school game after the display you've shown consistently on the national stage. A fundamental lack of understanding when it comes to the rules of the game isn't acceptable. At any level. If I was as bad at my job as you are at yours, I would be unemployed. As you should be. The discrepancy of talent level between Division I officials and these scab officials is night and day. At least 7 points and a win were taken off the board.

"But the offense put up an 18 point lead in the third quarter!!!" Shut up. Putting up 288 yards of total offense against the defense that was tied for last in the league with our New Orleans Saints is downright unacceptable. But hey, see Finger #2. That was the ugliest 4th quarter I have ever seen from a unit that used to take pride in blowing people out.

Thank you for the turnovers. You did your job for the majority of the game but giving up 233 rushing yards isn't cool and you deserve the criticism you get. No one expected you to set the world on fire but good god almighty, when you guys fuck something up you go all the way with it. Finger #3 didn't help you out with what I thought was a pretty blatant hold (from the fucking terrace!) on the 91 yard touchdown run, but one hold should not a 91 yard touchdown make. Honestly, of all the fingers being pointed, you deserve the thumb. Minus that one big run, you held the Chiefs to field goals all day. May have given up some yards, but yards don't equal points.

Finger #6: All you assholes saying that the fans aren't doing their job and that the crowd doesn't sound loud enough on tv.

What the fuck is wrong with you? Kansas City gave back the majority of their allotment and you still didn't buy tickets. Blow me.

For believing that this Saints team could make something out of this season. Drew Brees looks like he's playing in San Diego. We miss Sean Payton more than any of us could have actually realized. Sean Payton is looking like Coach of the Year material right now from the slovenly, drunken mess I'm sure he was in on his couch watching that uninspired 4th quarter for the offense. I'm not holding out any hope that this team will do a god damn thing this year. I don't think that we should tank. We're better than that.   Getting home from the game just in time to watch the falcons finish wiping the floor with the Chargers makes all of this even worse. I don't give a shit about playoffs or Superbowls anymore. I just want to see this team not suck. That's what they've given us so far this year. Suckage. The inability to put together a complete game is disgusting. I'm just not buying what they're selling in their press conferences anymore. My eyes are not deceiving me.
Posted by insidejob at 8:21 AM