From top to bottom, start to finish, there was not a single thing about that game that could be considered a positive. Nothing.

"But did you see how great Morstead was punting the ball?"

Stop it. Just shut up. If the fact that Morstead's 50 yard average on eight punts is all there is to be said about the game, then we sucked balls. And we did. There is no denying it. Every single facet of the game. Drew Brees was off. Every receiver dropped important passes. We didn't even try to run the ball consistently. The defense looked even more craptacular than usual. What the fuck do you mean "we weren't going to call any audibles?" Against the audiblingest quarterback of all fucking audiblers? Seriously? Cutback run after cutback run to the strong side and dump off after dump off to the uncovered no name tight end. How could it get any worse than it was last night? Make a starting linebacker and the only run clogging defensive tackle on the team inactive to have 5, that's FIVE, running backs active. Stellar fucking plan!

Can it get any worse than it was last night? The logical part of me wants to say that it can't but we are not dealing with logic here. We're dealing with the la-la-land version of the New Orleans Saints. We went from shock and awe last year to shock and awful this year. For the remaining 9 games of this season we will continue to be force fed this garbage starting at the top. When the Saints were 0-3 someone on ESPN said, "The Saints are done. They're waiting on Joe Vitt to get back to save their season. When has anybody ever said they're waiting on Joe Vitt?" As much as I hated hearing it then, that asshole was right.

Take a look at this box score from last night and tell me what you see that is encouraging. I'll wait.

The fact of the matter is, no matter how you look at it or try to justify it, the is the worst defense in the history of the football. And they are getting worse! Three weeks in a row we held teams to 7 second half points with the scheme we were running and instead of sticking with it we bench two defensive starters on a defense that doesn't have many starters to begin with. This is Crazy Town!

We've all wanted to see more Akiem Hicks (the lone bright spot from the lackluster efforts of last night) and Martez Wilson and we were given half of that equation. Whoever they are, if they're the best players, they need to be on the field. End of story.

I don't have any answers. I'm a fan. I shouldn't. But neither does the Saints coaching staff and that is truly frustrating. I'm not in with the OMG FIRE SPAGZ!!! crowd, but only because it would solve nothing. If our defense consistently gets donkey punched next year, then, hey, go for it. Was anyone actually surprised by the output of the Broncos offense? I know I wasn't. I was expecting a  42-35 coin flip outcome.

I feel sick.
Posted by insidejob at 9:16 AM No comments:

Did you see what happened Sunday? The Saints won. Not only did they win, but it was an awesome game. They looked good. Crisp. Ready. Amazingly enough, Saints fans were still complaining Monday morning. And you know what? That's fine. It's your life. I'm a glass half-full kinda guy.

Over the last two weeks, the Saints defense has allowed a total of 14 second half points and if you aren't happy about that going forward, you'll never be happy. They sacked Rivers 5 times, Roman Harper got himself a pick and they got off the field on third down, allowing only a 33% conversion rate. That's good stuff right there. The pressure being applied by Galette and Wilson...also good stuff. That's what they can do when we have a lead. Therefore, we need to play with a lead more often. There will be no complaints from me for two weeks about anything that the Saints have or haven't done. 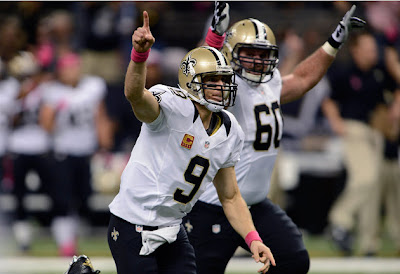 Drew Brees got his record. It is no longer Johnny Unitas' touchdown record. That's Drew's shit. Who dat!

From the minute I got downtown I knew that the $25 I spent on that ticket was going to be money well spent. (Yes, I said $25. Through ticket exchange.) To say the dome was electric would be an understatement. Every single person in the place was ready for a win and did their part to get it done. The Kansas City game was just odd in comparison. There was so much worry in the air it was palpable. But not on this day. You couldn't have asked for a better environment to get the first win of the season in. From blow up dolls being passed around the terrace, to a Chargers fan getting all whooped up on by the NOPD a few sections over the place was (to quote Mike McKenzie), "Off the meat rack!" (Whatever the hell that means.)

Anyone who knows anything about football and pays the least bit of attention to the happenings of the NFL each week knows that we were the best 0-4 team ever heading in to this game. (Those guys in Vegas who have been known to be pretty good at what they do thought so too.) I was called a ridiculous homer every day since the loss to Kansas City because I said the defense was improving. "Take off your black and gold glasses and admit that we suck!!!!" Whatever. Fuck all of you. Like I said earlier, I'm, a glass half full guy, and I'd rather pay attention and form my opinion based on what happens week to week on the field rather than sit here and give arbitrary "grades" to the guys on the field. "Dude missed a tackle!!! F-!!!!" This game isn't played in a vacuum. There are two teams on the field trying to beat each other. And guess what. The Saints haven't had a good defense in years. "But they won 13 straight and got a gazillion turnovers in '09 and won a Superbowl!" Yeah, well, LSU ran the table in the regular season last year. That doesn't mean their offense is worth a shit. So, Mr. Random Internet Message Board Guy, give the stats and numbers a rest. Let's enjoy the win. The scoreboard really is the only stat that matters and we got that this week.

With the bye week on the horizon, and the next home game being November 5 (my birthday party on Poydras) it feels like our next home game isn't ever going to come. But as sure as Roger Goodell is a piece of shit, the sun will keep rising and setting, and November will get here. If the Saints rip off 3 in a row, beating The Bucs and the Broncos leading up to the Monday night game, what do you think the dome will be like? How could you not be there if you love this team? Get a ticket.  Party with 70,000 of your closest friends and get your frustrations out by yelling ridiculously for 3 hours. The shit feels good.

We're playing with house money this year. With the disastrous start to the season, we've already been all but written off by the whole fucking planet, so what do we have to lose? I think this team may have realized how good it feels to win on Sunday. I know we as fans did.

The only regret I have from Sunday was forgetting to set my DVR.

P.S. Thanks for upholding the bounty suspensions on Vilma and Smith while reducing the for Fujita and Hargrove and in the process killing my pink cloud. Not only are you an asshole and eviscerator of all things football throughout the Gulf South, but you are now a pink cloud murderer. I hope Vilma exposes you for the panty wearing, power drunken, ass kissing, concussion lawsuit hiding bitch that you are. You'll get yours, Roger. You'll get yours. But we're going to get ours too. We'll see you in February in the Dome.

Posted by insidejob at 5:29 PM No comments: