Trade Down From 15 and Still Draft a Pass Rusher?

First things first: I know that Mickey Loomis drafts BPA and has no history of trading back, but wouldn't this be the kind of year to do something a little different? Shake things up a little?

The draft is all about value and we won't know who, if anyone, values our pick until the draft starts playing itself out. Here is a link to the NFL draft value chart. I'm not big on predicting draft day trade scenarios but there are quite a few teams out there with a plethora of picks this year. And who knows, maybe one of those teams wants #15. 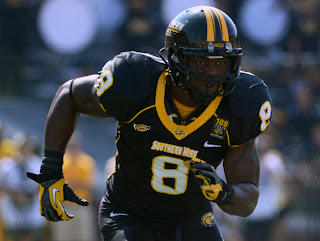 So what would we do if we traded back out of #15 into the late first or even out of the first altogether?
Well, if we were to trade into the second, This guy will be as good as whoever's there at 15. Sure he doesn't have the flash and the hype surrounding him that Jones, Mingo, Jordan, et al have, but this man can play. 10 sacks and 20 TFL last year. Those numbers are right up there with all the lead dogs in this draft, but You don't hear much about Collins from pretty much anyone. That's good news is the Saints are in a trade down to the second kind of situation. (If there is a partner, that is.)

This year's draft is so loaded with defensive play makers that it's a little ridiculous. Offense, not so much. Those poor teams in need of a quarterback might as well pick one up off the street rather than overdraft this group of late-rounders. To be quite clear on this, I do not care what position the Saints draft so long as it's a guy who can get after the friggin quarterback.

Seems that I'm hearing a lot of this new mindset:


"We picked up Butler and gave Galette a long-term deal, with Wilson in the mix we don't need to get a pass rusher with our first."

And upon hearing that, those who remember watching the Dome Patrol literally abuse opposing offenses think to themselves:


"Well, shucks. These guys must be right. We picked up one of Ryan's guys who's an average player and have two unknowns with high ceilings...might as well consider ourselves set in the pass rushing department and draft Drew's future replacement or a wide receiver at 15 and call it a day."

Yeah, I just don't buy that anyone on this team's defense is 100% safe in their starting role right now besides Cam Jordan and Curtis Lofton. And nor should they be. You all saw what they did last year. They all blew it on a rather consistent basis and didn't even resemble an NFL defense at times. That 41-0 shutout of the Bucs being their stand out performance of the year.

Be it a 5-tech defensive end or a WOLB, a hard hitting safety, etc., that's where the Saints' focus should be. Defense, for f**k's sake.
Posted by insidejob at 1:57 PM